On Saturday 30th April on Anneka Rice’s Saturday Breakfast show St James was mentioned in the “Pause for Thought” slot. Check it on on the BBC iPlayer Radio about 15 minutes into her show.

Here are some photos of the gardens that John, a fantastic volunteer, has created just inside the gates to the Church courtyard. MANY MANY thanks. 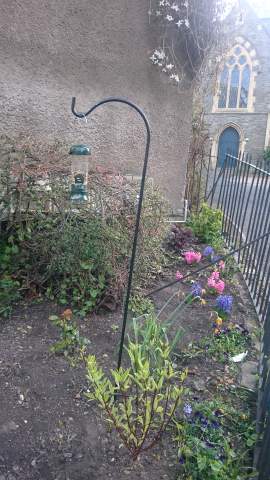 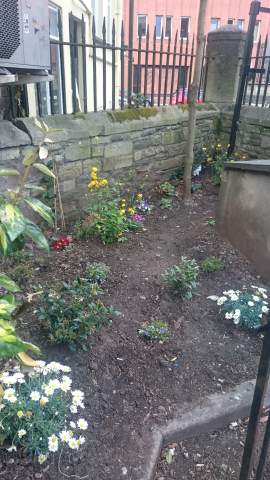 What is ST JAMES PRIORY

Check out this leaflet ….

Don’t forget that access to St James Church is available through the Cafe which is adjacent to Bristol Bus Station.

On 9th February a group of 1st Year Occupational Therapy Students volunteered their time to help our Charity.

They were involved in Painting, Gardening, General Tidying & in the Cafe.

We are VERY grateful for the gifts of their time and selves. Once again our Cafe has been awarded the highest Food Hygiene Standard Award.

The latest newsletter (Christmas 2014) is now available to download.

Christmas Lunch is now available to book in our Cafe.

We have standardised the Room Hire Rates with effect from 14th July.

See MEETINGS in the Main Menu and Download the PDF file for easy reference.

The pilgrimage to Santiago de Compostela in northwest Spain owes its origin to the discovery, in what is now Galicia, of the tomb of the Apostle James the Great sometime early in the 9th century. It probably achieved its greatest popularity in the 12th century, when it came to rival Rome and Jerusalem as goals of Christian pilgrimage, and though it declined thereafter, it has never been entirely forgotten.

John Beirne, enjoying a coffee, before starting out on his journey to Compostella. This year he will celebrate his 71st birthday en route. He is hoping to raise awareness of the historical importance of this pilgrimage which used St James Bristol as a starting point.

Lloyd's Bank Volunteers planted bulbs in the South Garden back in November 2013.

Here is the result of their labour.    THANK YOU !!

The next weekday Masses will be on Wednesday  15th September & Thursday 16th September at 1.05pm.